A natural "English" park called "Tereziino údolí" valley is situated near Nové Hrady, a town whose first written references date back to 1279. A pheasantry was on the place of the valley from 1667. In 1756, the Buquoy family asked their gardener Ignaz Fnoika to create a model "English park, which later gained the name according to its founder - Countess Terezie, the wife of Jan Nepomuk Buquoy. Originally, the park had been called Vallancherie, Schönthal or simply "The Friendship Garden". Various buildings were built here during this time. In the years 1788-97, a small private spa called "Wenzelsbad" or "Neugebäu" was built. Later in 1803 the "Blue House" was constructed, where the countess enjoyed her summer months (it was swept away by a flood in 1915). Also built at this time were little monuments with versed inscription and small pavilions. An artificial waterfall was created in 1817 and the"Swiss Cottage" in 1852, on the initiative of Earl George. The local "Hamr" Mill and the Cartwright`s house went trough a neo-Gothic reconstruction in 1860. Exotic woody plants such as Douglas fir, Weymouth pine and Tulip tree were grown, as were various ornamental bushes and herbs. In 1949 the "Tereziino údolí" valley was pronounced a nature reserve. Nowadays it cover a total area of 138 hectares. The entrance gate to the reserve dates back to 1797. The town of Nové Hrady itself boasts many historic monuments, which is not usual for towns of comparable size. Three manor houses a church and cloister can be also found here. Not to mention the picturesque lowland surrounding with lakes and vast forests or nearby "Novohradské hory" mountains containing uspoilt nature, pure clear waters and abundant forests. 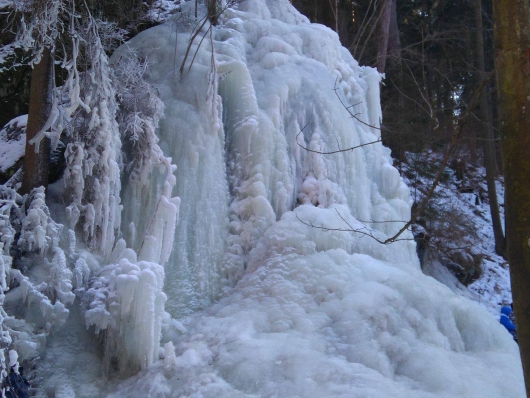